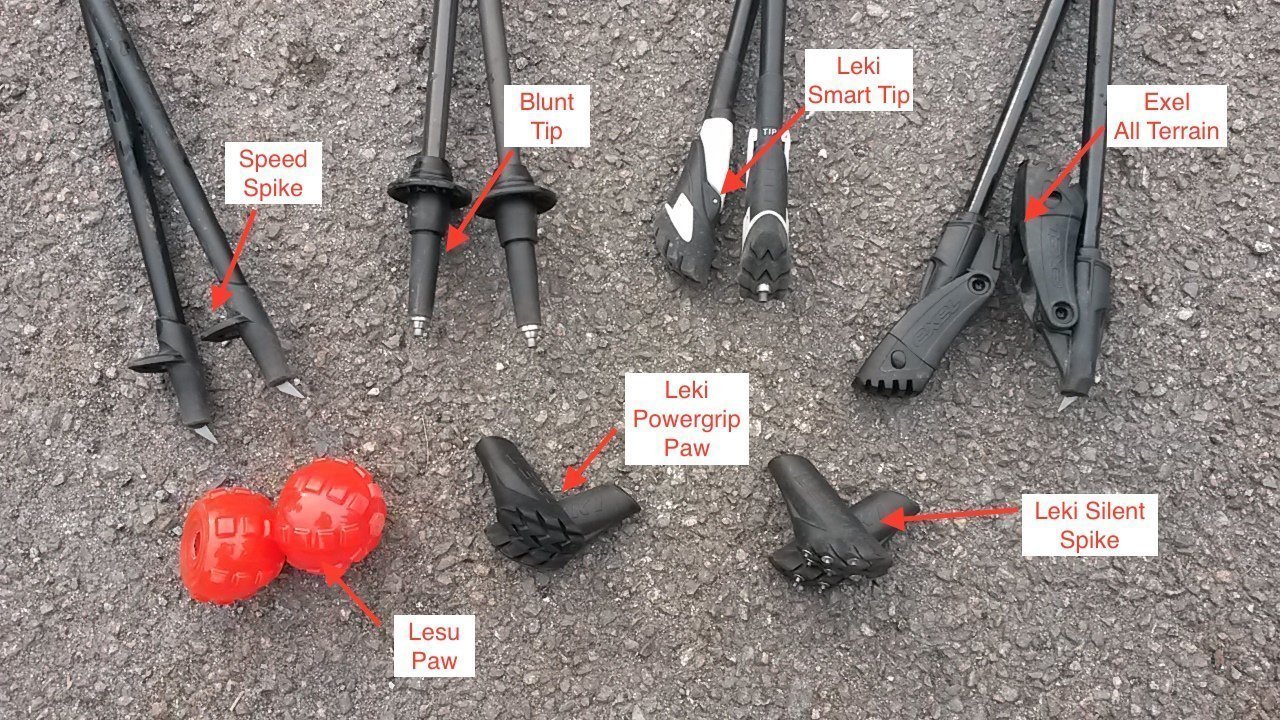 Have you ever given any thought to the tip system way down at the end of your pole? Does it matter, and if so, what are your choices?

Why does the type of tip/paw on my pole matter?
If you want to optimise your Nordic walking experience and performance you need to consider every aspect of the pole you buy – the strap, the quality of the pole shaft itself and the tip/paw combination. For me, because all my poles are 100% carbon, it’s the tip system that dictates the pole I choose for a particular walk or event.

Tips
The tip is the piece of plastic with a metal point at the end of the pole shaft. The purpose of the tip is to give you good purchase in the ground so that you are able to push effectively down through the pole during the whole of your swing without the pole slipping.  It is designed to be used primarily on softer surfaces such as grass, sand and non-metalled tracks.

The two main types of tips used in the UK* are:

Both are made from tungsten carbide, an extremely durable metal.  Here in my opinion, are the pros and cons of each type:

Paws
The paw, sometimes called the pad, boot or shoe, is the rubber stopper that covers the tip. Noise reduction, vibration absorption and grip are the three key components for a good paw.  I generally walk on soft ground and haven’t covered extensive mileage with these removable paws.  The three paws on the market are the Leki powergrip, the Gabel Roadster and the Exel Control Asphalt.

I trialled all three (plus the Leki Slient Spike) prior to walking the Bristol 10k and half marathon, and by far the best performer for me was the Exel Control Asphalt paw.  It was sticky, springy and quiet – but not very durable.  I enjoyed using it on those road endurance events, but I wore a hole in the base by the end.  The main bugbear with removable paws is having to remove and pocket them when they’re mucky.

All terrain systems have been developed by manufacturers to address the issue of having to switch from paws to tips when moving from hard to soft ground, such as from pavement to grass. There are two varieties:

Here’s my thoughts on these..

Leki Silent Spike – like the standard Powergrip paw but with six tiny carbide spikes on the underneath. Designed so that you can move from hard to soft ground without removing the paw.  A compromise which doesn’t work for me.

Lesu – I reviewed this paw last week.  Like the Leki Silent Spike it’s marketed as being a non-slip, multi-terrain, hard wearing paw which you don’t have to remove when switching between hard and soft surfaces. It weighs twice as much as the other paws and I gather from a Nordic walking group who have been using it that it wears down quickly.

Leki Smart Tip – A tip/paw combination.  When the paw is retracted there isn’t enough exposed tip to bite properly into the ground, plus the system can get clogged with dirt easily so needs regular cleaning to keep it working.

Exel All Terrain – Another tip/paw combination. This system combines the speed spike with a hard rubber paw, which is hinged so you can clip it back against the pole shaft using your foot.  Completely hands free.  The paw, made of hard rubber, is noisy on tarmac.

My top picks
Best on soft ground, tracks, sand and stony ground – The speed spike
Best on tarmac – The Exel Control Asphalt paw
Best all rounder – The Exel All Terrain

You can find our current favourite Nordic walking poles here and if you’re looking for our advice on best walking kit here’s our recommendations:

walking socks (socks are an important but forgotten factor)

Layering: How to optimise your clothing for active walking

What should I take on a long walk?