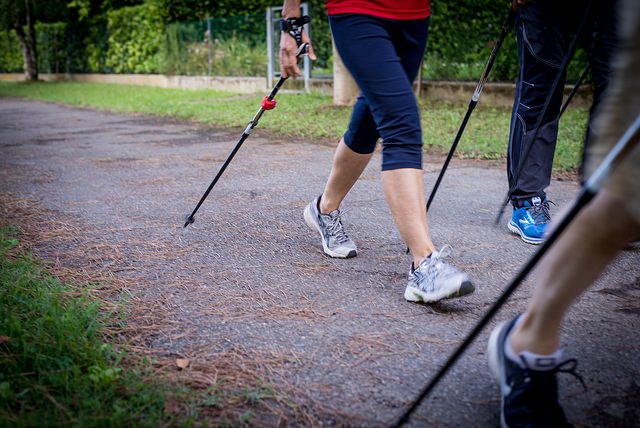 In Bristol we are lucky to have lots of public parks and open spaces which means we mostly Nordic walk on grass and tracks.  It makes things nice and easy technique wise – no unpleasant scuffing noises if you’re not planting cleanly plus the tips of the poles grip well in the soft ground, providing an excellent propulsion platform.

However, when walking by yourself you will probably be walking on tarmac or similar hard ground at some stage.  Walking on tarmac is excellent in many ways.  It’s far less forgiving than grass so you can hear every scrape and unevenness in your walking rhythm – which is a big incentive to tighten up on your technique.  If done correctly it also provides a particularly good core workout.  There is though a knack to it and recently I’ve had several emails asking for advice on how to Nordic walk on pavements.  A common problem is that the poles frequently slide making it difficult to get a good grip and a satisfactory action.  So here’s some pointers for pavement walking which I hope may help you:

Do I need to use my paws every time I walk on tarmac?
Almost all Nordic walking poles are sold with ‘paws’.  These are rubber stoppers which cover the metal tip at the base of the pole.  Most people use their paws when walking on tarmac or similar hard ground in the belief that it’s quieter and that the tips may be damaged if they’re not protected.  Neither of these points is strictly true.
Some tips, such as the Exel racing spike which has its own inbuilt suspension system, are as quiet as most paws.  Also, the tips are made of tungsten carbide, an extremely strong metal, so you will not damage them if you use them uncovered. The only potential problem is that very occasionally the metal tip might remain embedded in the tarmac, although this generally only happens if it was faulty and not fixed properly when manufactured.
So it isn’t necessary to cover the metal tip every time you walk on tarmac, although you can of course if you want to.  For health and safety reasons it is wise to use paws if you are on a busy pavement or in a road race such as the Bristol 10K.

Is there a special technique for walking on tarmac?
Yes, especially if you are using your paws:

What else should I know about walking on tarmac?
Walking on hard surfaces such as tarmac increases the stresses on your tibia (shin) bone and can result in shin splints.  This isn’t an issue if you are only doing short bursts but if you’re regularly pavement walking it’s advisable to buy some training shoes with good shock absorption.  Walking boots and shoes aren’t designed for this surface and generally won’t provide sufficient cushioning.

Make sure you include shin stretches at the end of a pavement walk.  Here’s a brief video of one I recorded a while back for those training for the Bristol 10K.  It is in fact a great stretch after any walk.

Improve your back health and tone up your arms with these Nordic walking tips. Plus 3 surprising reasons why NW poles are great on a country walk

Double planting or sore forearm when Nordic walking? Here’s what to do