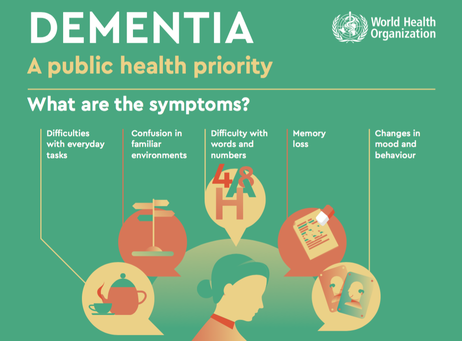 There were a couple health-related stories last week which I thought might interest you.

Last Tuesday the World Health Organisation (WHO) issued global recommendations on how to reduce the risk of cognitive decline and dementia, including Alzheimer’s.  Worldwide, around 50 million people have dementia and, with one new case every three seconds, the total number is projected to reach 82 million in 2030 and 152 million in 2050.

Currently there is no curative treatment for dementia hence the WHOs focus on managing known risk factors.  Crucially, while age is the strongest known risk factor for cognitive decline, dementia is not a natural or inevitable consequence of ageing.

Several recent studies have shown a relationship between the development of cognitive impairment and dementia with lifestyle-related risk factors, such as physical inactivity, tobacco use, unhealthy diets and harmful use of alcohol.

Certain medical conditions are associated with an increased risk of developing dementia, including hypertension, diabetes, hypercholesterolemia, obesity and depression. Other potentially modifiable risk factors include social isolation and cognitive inactivity. 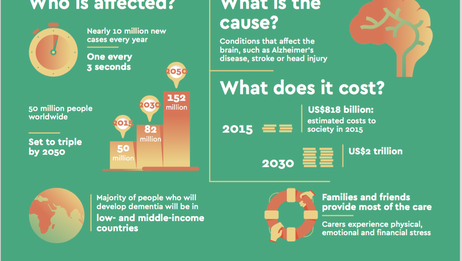 Other recommendations include stopping smoking and eating a Mediterranean diet high in fruit, vegetables, fish and whole grains.  Heavy drinking has also been shown to harm the brain and, while many studies have found that moderate drinkers are better off, the WHO says this is not enough to recommend small amounts of alcohol as a protective.  Instead it says that people who drink ‘hazardous or harmful’ amounts should be advised to cut down.  The NHS suggests up to 14 units a week.

Heart disease deaths are rising among under 75s

The number of people dying from heart and circulatory diseases before they reach their 75th birthday is on the rise for the first time in 50 years, according to an analysis of the latest national health statistics by the British Heart Foundation.

Simon Gillespie, chief executive of BHF said “In the UK we’ve made phenomenal progress in reducing the number of people who die of a heart attack or stroke.  But we’re seeing more people die each year from heart and circulatory diseases in the UK before they reach their 75th or even 65th birthday.  We are deeply concerned by the reversal.”

The decline of smoking, reduction of salt in foods, and widespread use of statins have all contributed to dramatic falls in heart disease.  However while overall death rates are still coming down unhealthy lifestyles are threatening to halt further reductions.  In 2017 adult obesity rates reached 29%, almost double that of 25 years ago, plus the population is less physically active.  As a result about 14 million people are thought to have high blood pressure and nearly 5 million diabetes, often without knowing it.

I am sure that none of the above will surprise you.  The message (as always) is that we need to be active, eat the right foods, not smoke, drink in moderation, and keep our weight in check.  The bigger question is: given that we know all this, why isn’t more being done to help our increasingly overweight and inactive society.

Nordic walking can help you lose weight, feel fitter and get motivated to eat better. It can put you in the right mindset and age shouldn’t be a barrier – if you can walk you can Nordic walk. Get taught by an experienced Nordic walking instructor who will show you the the technique which will help you build strength, work your heart and lungs and maybe even make new friends.

The Cardio benefits of Nordic walking – and Body Boost

Geof’s asthma story and a few facts about red deer